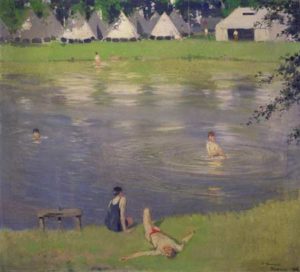 ‘The Eve of the Battle of the Somme’ by Sir H.J.Gunn

The Battle of the Somme was a joint operation between French and British forces during World War One. It took place between July and November 1916 on either side of the River Somme, France. The plan was to bombard the German trenches for eight days before launching the offensive, thereby destroying German artillery and making it easy for allied troops to break through enemy lines. Unfortunately, the German trenches had concrete bunkers to shelter troops. This meant that when the advance began on 1st July, German artillery was able to slaughter the advancing troops. The first day of the Battle saw the worst casualties in the history of the British Army. Nearly 60,000 men were wounded and 20,000 men died. 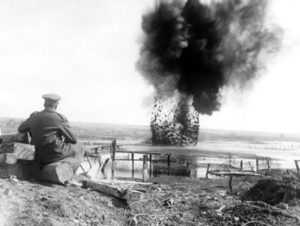 Royal Engineers clearing the way on the Somme

When the Great War started, the Allied army was still using tactics based on massed lines of soldiers and cavalry attacks, much like the tactics used at Culloden in 1746. Original plans for the Battle of the Somme included a final cavalry charge. This was cancelled after the slaughter of thousands of troops by the newly developed machine gun. Trenches were dug for the first time in this war and offered a degree of protection for soldiers . However, once a trench was breached, the defending soldiers would find themselves trapped in narrow gullies having to fight hand to hand using bayonets and rifles. Tanks were also used at Somme. 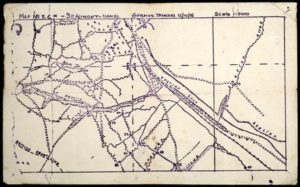 Trench Map of the Beaumont-Hamel

The battle for Mametz Wood took place early on in the Somme offensive.
The 38th Welsh Division took heavy casualties as they advanced uphill towards German positions. They were successful in capturing the wood. The Battle of Ancre was the last stage of the Somme offensive and saw the destruction of the last German outposts near the allied trenches. 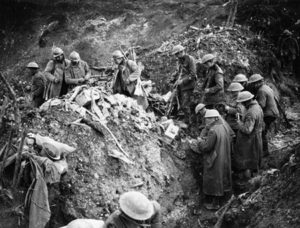 By the end of the offensive in the winter of 1916, the German and Allied armies suffered over one million casualties and neither side made any major gains.