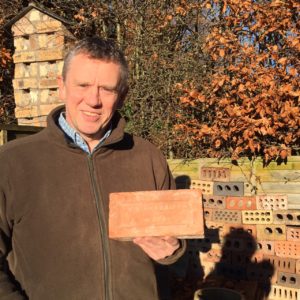 Some of you may have heard about the recent Scottish Heritage Angel Awards? Here at Scran we caught wind of the fascinating work of Mark Cranston, who proceeded to win Category A for Investigating & Recording his extensive collection of bricks.

Scran has a pile of brick related content, which Mark was already familiar with, and through a series of fortunate events, we were able to contribute to his ever growing collection. East Lothian resident, Gina Williams, donated the brick which Scran then delivered to Jedburgh. 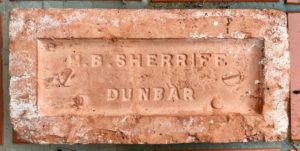 The brick was from a Dunbar manufacturer and although he already had an example of a M.B. Sherriff brick, he had not seen this particular variation. One face on each has a shallow rectangular ‘frog’ or depression with text MB SHERRIFF/ DUNBAR and impressions of screw-heads.

Seafield Brick & Tile Works at West barns, near Dunbar, supplied the local market as well as special commissions in Scotland and abroad.  These bricks were made using deposits of surface clay; originally dark grey, the clay becomes red when fired, a change caused by the oxidation of iron contained in the clay. The Seafield brickworks operated from the early eighteen hundreds on land reclaimed from the sea between West Barns and Belhaven. Once in the hands of David France, it passed to William Brodie and then his relatives, the Sherriffs of West Barns. William Brodie, invested in new equipment and expanded the works, exporting many of the products on his own fleet of steam vessels from Dunbar Harbour.

Unusually for a Victorian industrialist, M.Brodie Sherriff  was a woman. In 1884 she purchased & re-opened the brickworks at Westbank, in Portobello, so expanding the business further. 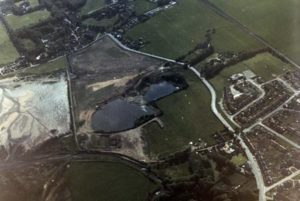 Nineteenth century East Lothian had a number of industrial scale plants producing bricks, tiles, pipes and other large scale ceramics. Seafield relied upon surface deposits of clay. Later, the abandoned clay pits were used to dump municipal waste and landfill until around 1970. Then the land was landscaped and planted; part was reserved for amenity, being integrated into the John Muir Country Park in 1976. 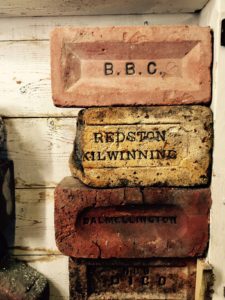 You can see the full extent of Mark Cranston’s collection of bricks  http://www.scottishbrickhistory.co.uk/